We’re thrilled to have unveiled a brand-new playground at a children’s hospital ward close to our headquarters in Dartford.

A donation of £16,000 was used to purchase new equipment for the playground of Willow Ward at Darent Valley Hospital. Children admitted to the ward had not been able to play outside since last summer when the hospital’s old climbing frame was deemed unsafe and cordoned off.

Now young patients will be able to play on an impressive wooden frame shaped like a galleon, which has lots of interactive features including a slide, portholes and a chalkboard. The equipment, which was installed by Dartford-based Playcubed, also includes a ramp to allow access for 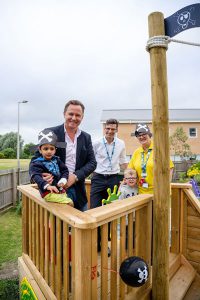 children of all mobility.

Europa Credit Manager Chris McGurk, put forward the idea of fundraising for a new play area after visiting his friend’s children on the ward last year. He said: “It was devastating to see the children on the ward having to stay indoors due to the play area being in bad condition. The ward staff work so hard to care for the children, including dedicated play specialists who do a wonderful job to relax and distract the children by their bedside.

“I wanted to see what we could do to help to give the children the most positive experience during their time in hospital. Now, just a few months later, the children have a brilliant new facility. I’m so pleased we’ve been able to make a difference to the young patients of Willow Ward, and their families. I hope they have as much fun as possible exploring their exciting new ship!”

This project was chosen as the first of our 2018 community efforts. Together with a significant donation of £10,000 from the company’s charity fund, our kind-hearted staff from across the UK took part in charitable challenges and activities to raise the remaining £6,000. Europa Leeds Branch Manager Nathan Lynn and Regional Manager Adrian Redmile raised an impressive £650 by running the Sheffield half-marathon in April.

Sally George, Head of Fundraising and Voluntary Services at Darent Valley Hospital, said: “We’d like to say a big thank you to Europa and all of their staff for donating their time and money, we are absolutely delighted with our new and improved play area. The ship looks fantastic and our young patients and their families are already exploring the equipment and getting the much-needed fresh air and physical activity to help aid their recovery. 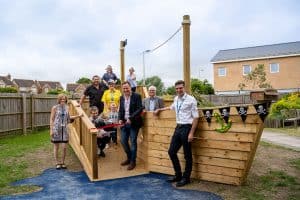 “Projects like this just wouldn’t be possible without the generosity and goodwill of local businesses and the community. We are so grateful to Chris McGurk, Andrew Baxter and all at Europa for helping to make this dream playground a reality.”
Our £30m 1Hub headquarters, in Albion Road, Dartford, is located just ten minutes from Darent Valley Hospital and many of our employees and their families have been treated there. We are keen to continue our community support work in the area, having previously supported other local projects including an arts and education scheme with Gateway Primary Academy.

Managing Director, Andrew Baxter said: “I’m delighted that we have been able to play a part in this fantastic new playground for the children of Willow Ward. The hospital provides an essential service to all of our employees who live in the Dartford area so we were more than willing to get involved. I’d like say a huge thank you to our staff for their fundraising efforts.”