Europa Worldwide Group is celebrating after featuring in The Sunday Times Top Track 250 for the second year running.
The ambitious independent logistics operator ranked at 153rd in this year’s prestigious league table, climbing up 65 places from last year. 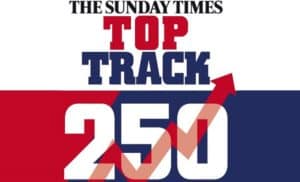 The Sunday Times Top Track
The highly respected Grant Thornton league table ranks Britain’s private mid-market growth companies with the biggest sales.
Europa is the highest-ranking logistics provider in the list, with only one other freight and logistics operator, Davies Turner, featured.

Europa reveals record annual results
This year Europa revealed record turnover (£180m) and profit (£5.2m) in its Annual Financial Results announcement, following an exceptional 12 months – the best in the company’s 50-year history.
Going from strength to strength, the brand is expecting to see further growth in 2020.

Comment from Andrew Baxter, Managing Director at Europa Worldwide Group:
“We’re thrilled to have appeared in The Sunday Times Top Track 250 league table for the second year running. It’s a fantastic achievement for the brand and showcases all of the hard work each division has put into growing the company.”
“As we continue to push the boundaries of what we can deliver across Europa’s divisions – Road, Air & Sea, Warehouse, Showfreight and Contact Centre – we’re making exciting announcements across the company including the recent news of work starting on our new super-sized facility in Corby.
“This is a huge project for us and will increase our strength, enabling us to become one of the “best in class” within the logistics industry.”

Forming part of Europa Warehouse offering of 3PL warehousing and logistics, the site will be one of the “best in class” and is set to double the logistics portfolio of its Warehouse division.

Europa’s achievements this year
In addition to the Top Track 250, Europa’s achievements this year have included:
• Record annual results reaching a turnover of £180 million
• Acquisition of part of Menzies Response
• Launch of its RAPID Career Development Programme which sees school-leavers recruited straight into the business as the company looks to tackle staffing issues within the industry
• Successful results from its newly launched Sheffield and Belfast based European road freight branches

Top Track key findings this year
The Top Track 250 is sponsored by Grant Thornton and Lloyds Banking Group, and compiled by research and networking events firm, Fast Track.
A key finding of this year’s Top Track 250 league table is that Britain’s private mid-market growth companies have prospered despite economic and political uncertainty, and have positioned themselves for further expansion.
Services and retail are the two largest sectors, with 100 and 42 companies respectively, representing over half of the league table (57 per cent).
There are also 40 wholesalers, 40 construction firms and 28 manufacturing firms that make up the table.

Comment from Dave Munton, Head of UK markets at Grant Thornton UK LLP:
“Whilst the headwinds of political and economic uncertainty have been a consistent feature of the UK economy over the past year, mid-market firms have continued to prove their resilience.
“They’ve demonstrated their adaptability to uncertain times and found opportunities for growth, both at home and abroad.”

About Europa
Europa Worldwide Group is a specialist road, air & sea, warehouse and showfreight operator employing more than 900 people across its 16 sites in the UK, as well as Hong Kong and Belgium with representation in 100 countries.