Two years since we launched our bespoke in-house IT system, Leonardo, the new software is now at the heart of operations across our 750 strong team. 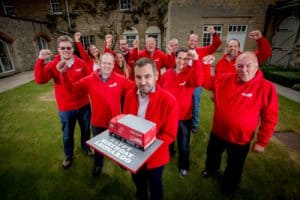 We unleashed Leonardo in July 2016, a revolutionary decision to give the business ultimate control over its own IT systems in a drive to improve responsiveness, efficiency, productivity and scalability across our 11 UK sites. 24 months later and the streamlined benefits of Leonardo are apparent across all arms of the business, from the finance team to inside the Europa cab.
IT Director at Europa Worldwide Group Richard Litchfield said: “We reported how difficult the introduction of Leonardo was at the time of launch with a particularly challenging first few weeks, as we replaced a 15-year-old outdated system with our own ‘built from the ground up’ software. It was not a smooth ride to start with – however we very quickly began to see the benefits across the entirety of our road freight management system, with a much slicker process from data entry to invoice.
“What is so special and innovative about Leonardo is how it allows us to convert our own ideas into operational systems at speed, without the complexity of dealing with a third party. Our 30 strong IT team is now rolling out software updates to Leonardo on a weekly basis, which demonstrates the true value in having autonomy over your own digital infrastructure.”
In the two years since the launch, our IT team has worked consistently to develop various additions to the Leonardo suite of services, including LeoRoad which provides real time operation monitoring of shipments, LeoCab which offers enhanced delivery and collection information and real-time traffic monitoring and LeoFinance which gives improved visibility across the business’s entire accounts system. Current additions to the suite include LeoLoader, LeoForwarding and LeoShunt.
Richard added: “A major achievement of the Leonardo project has been our shift from a paper-heavy organisation to a completely paper-fr 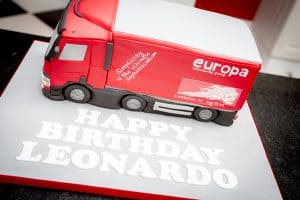 ee system in our transit facility. It has also played a central role in preparing the business to set out on the acquisition trail in our push to double our turnover again in the next five years. We’re by nature a very ambitious and agile senior management team and we’re thrilled that our bold ideas have been so readily adopted and embedded by the wider workforce, so much so that we decided to celebrate the Leonardo birthday with a cake.
“Leonardo has helped to transform Europa into the profitable and fast-growing business it is today and we are looking forward to seeing what more can be achieved with the system over the forthcoming months and years. It was completely the right decision for us and the results are justifying our inspiration – from the great man Leonardo Da Vinci himself – who said ‘simplicity is the ultimate sophistication.’  is now more simple and more efficient than it has ever been and I’m certain it will continue to help us grow and hit our targets across all divisions of the business.”
Operations Director at Europa Road, Dan Cook, added: “Three years ago our system handled in the region of 22,000 European consignments per month. Now it handles more than 36,000 – an increase of more than 60%, but with only one more person in the terminal and three more people in the operations team.
“An increase of less than 3% in headcount; that’s efficiency and productivity of a slick system and capable effective people. We now we have the perfect model in a purpose designed building, to support purpose designed processes, supported by purposely designed IT.”